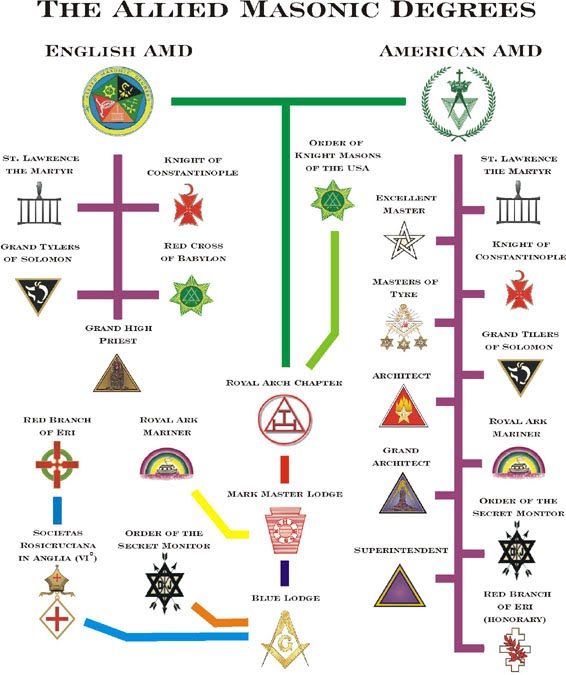 The Allied Masonic Degrees are an invitational organization, and requires membership in the Royal Arch as well as the Symbolic Lodge. Membership is limited to 27 members per council.

Be it remembered that on August 5, 1933, this Grand Council took as its date of formation January 14, 1892, since this date was the beginning of the Allied Masonic Degrees in America with the formation of the Sovereign College of Allied Masonic and Christian Degrees at Richmond, Virginia, that on April 16, 1932, the subsequent establishment of a Grand Council of Allied Masonic Degrees of the United States of America occurred in Salisbury, North Carolina, and that the union of the two bodies was drawn up and entered into July 18, 1933, and was ratified by the North Carolina Grand Council August 5, 1933 and was ratified by the Sovereign College at Norway, Maine August 24, 1933, and became effective as of September 7, 1933.

The Allied Masonic Degrees are detached degrees some of which, many years ago, were conferred under Craft warrants and formed part of the then loosely governed Freemasonry of the period.

Many of these detached degrees became dormant in some places, although in others they were conferred as side degrees. In time, the better of these degrees were grouped together in an organized body under the title of Allied Masonic Degrees. The degrees comprising the system in our Jurisdiction in the U.S.A. are the Royal Ark Mariner, Secret Monitor, Knight of Constantinople, Saint Lawrence the Martyr, Architect, Superintendent, Grand Tilers of Solomon, Master of Tyre, Excellent Master, Installed Sovereign Master, Installed Commander Noah, Red Branch of Eri and Ye Ancient Order of Corks. They are conferred in the United States in Councils chartered by the Grand Council. Each Council is limited to twenty seven members, with two exceptions. One of these Councils is known as the Council of the Nine Muses and is limited to nine members. The other is Grand Masters Council, which has what is known as a roving charter. The purpose of the latter Council is to provide a place of membership in the Allied Masonic Degrees for brethren residing in localities where Councils have not been organized. Membership in every Council of Allied Masonic Degrees is by invitation, and is predicated on membership in the Royal Arch Chapter.

In addition to perpetuating these degrees, there is still another and equally important purpose. It is to bring together, in small groups, Freemasons who are interested in the advancement of all Masonry, preparing themselves to better serve the Craft through the
medium of study and research. By limiting the membership in a Council and securing membership only by invitation, the result is a congenial group able to enjoy full fellowship when meeting together. Wherever there is an active Council of Allied Masonic Degrees, it exerts an influence for the betterment of Freemasonry in all the Masonic Bodies.

There is no intention on the part of the Allied Masonic Degrees to detract from any organized and established body of Masonry. On the contrary, you will find our members active, beyond the average, in all local Masonic bodies. The real purpose is to stimulate interest in Masonry in general and bring together in small groups those who are interested in the study of Masonic subjects. Thus they are better enabled to serve the Craft.